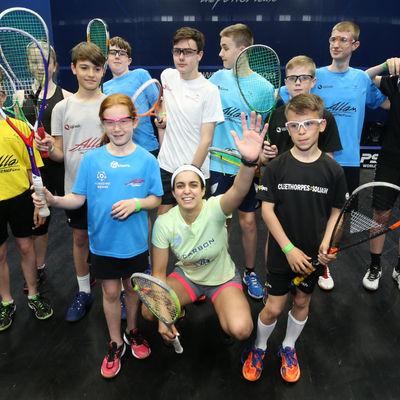 We recently partnered with Sport England to engage and encourage children to become more actively involved with Squash throughout the 2022/23 season.

Our aim is to work with the local communities of selected PSA Tour tournaments to ensure that local junior school children have the opportunity for an introduction to squash from a trained coach in the aspirational setting of a tournament.

This is delivered in conjunction with local squash clubs and youth groups as an exit route for the juniors wanting to pick up the sport, joining their local junior programme.

Children who take part in the tournament also have the opportunity to watch professional squash, further inspiring future generations of the sport.

Dunlop, partners of the PSA Foundation, have also pledged to give a free racket and ball to the first 10 children who decide to join a local junior programme after their tournament experience throughout the season.

The first tournament under this project has now taken place, the Northern Joe Cup in Manchester where 113 children were introduced to squash.

This cohort of children were part of a summer camp that also had meal support provided by FareShare, the food charity Marcus Rashford’s actively works with – ensuring the children not only had fun playing squash but were also provided with nutritious meals.

The Northern Joe Cup is a festival of squash designed to both showcase the sport, and raise awareness and funds for The Brain Tumour Charity- the world’s leading brain tumour charity and the largest dedicated funder of research into brain tumours globally.

This tournament was created to support Northern Joes Fund, a fund The Brain Tumour Charity manage in memory of Joe Rawcliffe, who sadly passed away from a brain tumour in January 2020.

The latest edition raised £6k for a The Brain Charity at The Northern Joe Cup, through the Dunlop Chuck a Ball challenge, raffles, the one rally challenge and more.

We are thrilled to not only be a part of developing the future of the sport, but to also support a vital cause in the process.