How the PSA’s ‘World Series’ was born 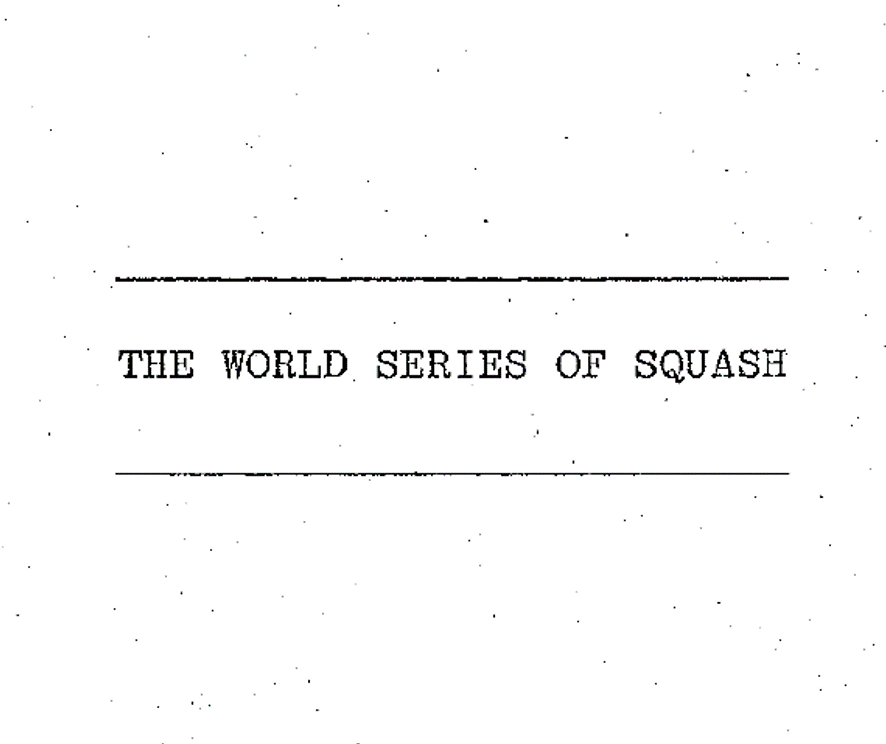 The game of squash is growing significantly in the modern era, with more and more players and viewers supporting the sport every year. Even since 2010, the United States in particular has seen a 66 percent player increase, while the 2019 World Team Squash Championship was broadcasted globally across 23 countries to over 3 million viewers.

This rate of growth over the past decade is exciting for the sport, and although squash fans and players may not know it, they may want to thank Mark H. McCormack and the International Management Group (IMG) for helping shepherd the game of squash into the public eye with the creation and implementation of the World Series of Squash in 1978.

McCormack, dubbed the “Most Powerful Man in Sport” by Sports Illustrated in 1990, is credited as being one of the original founders of professional athlete representation. He was a forward thinker of the sports industry, constantly looking for innovation in any corner of the sports industry, and that helped him grow IMG into a billion dollar player representation company.

In early 1977, McCormack noticed that in Europe, and in the United Kingdom in particular, the game of squash was growing at a higher rate than any other sport. With 2.5 million U.K. participants, only swimming and tennis boasted a higher participation rate. He predicted that the sport would undergo a boom in the 1980’s due to increased television exposure and the glass-backed squash court becoming commonplace.

With increased interest comes potential demand, and McCormack knew that the public was ready for an event that brought together the world’s top players. To implement such an event, McCormack decided to use a system based on the methods that tennis and golf utilize. A coordinated circuit system of professional tournaments in various locations was designed, with the tournaments linked by a points system. At the conclusion of said tournaments, the top 16 players would come together for a Masters event, which would culminate in the Masters champion being considered as the best squash player in the world.

With 10 weeks set aside from October 1 until December 9, the world’s top players eagerly joined, including names like Geoff Hunt, Qatar Zaman, Gogi Alauddin, Bruce Brownlee, and Jonah Barrington, among others.

In the same year, distinguished London sportswriter and squash correspondent Rex Bellamy wrote that, “There can be no doubt that professional squash will continue to be an expanding segment of the entertainment industry, with more and more sponsors realising the vast extent of this new market for their products.”

To put on an annual event of this magnitude, McCormack needed to find a title sponsor who realized the blossoming marketing opportunity he was creating. With the help of account executive John Beddington, IMG closed a deal for the four country circuit to be sponsored by Pakistan International Airlines. Though like many other notable sporting events, the World Series of Squash changed corporate partnerships after Pakistan International Airlines changed their marketing strategy.

In looking for a new sponsor to host the event, McCormack penned a 1979 letter to Perrier Waters President Bruce Nevins. He suggested that his company would make the ideal title sponsor, “because of the demographic compatibility between the sport’s participants and many of your brands and the enormous popularity of squash in many parts of the world as well as its growth trend in the United States.”

Perrier agreed to assume the role of title sponsor, and still sponsors the Perrier Squash Challenge Cup to this day.