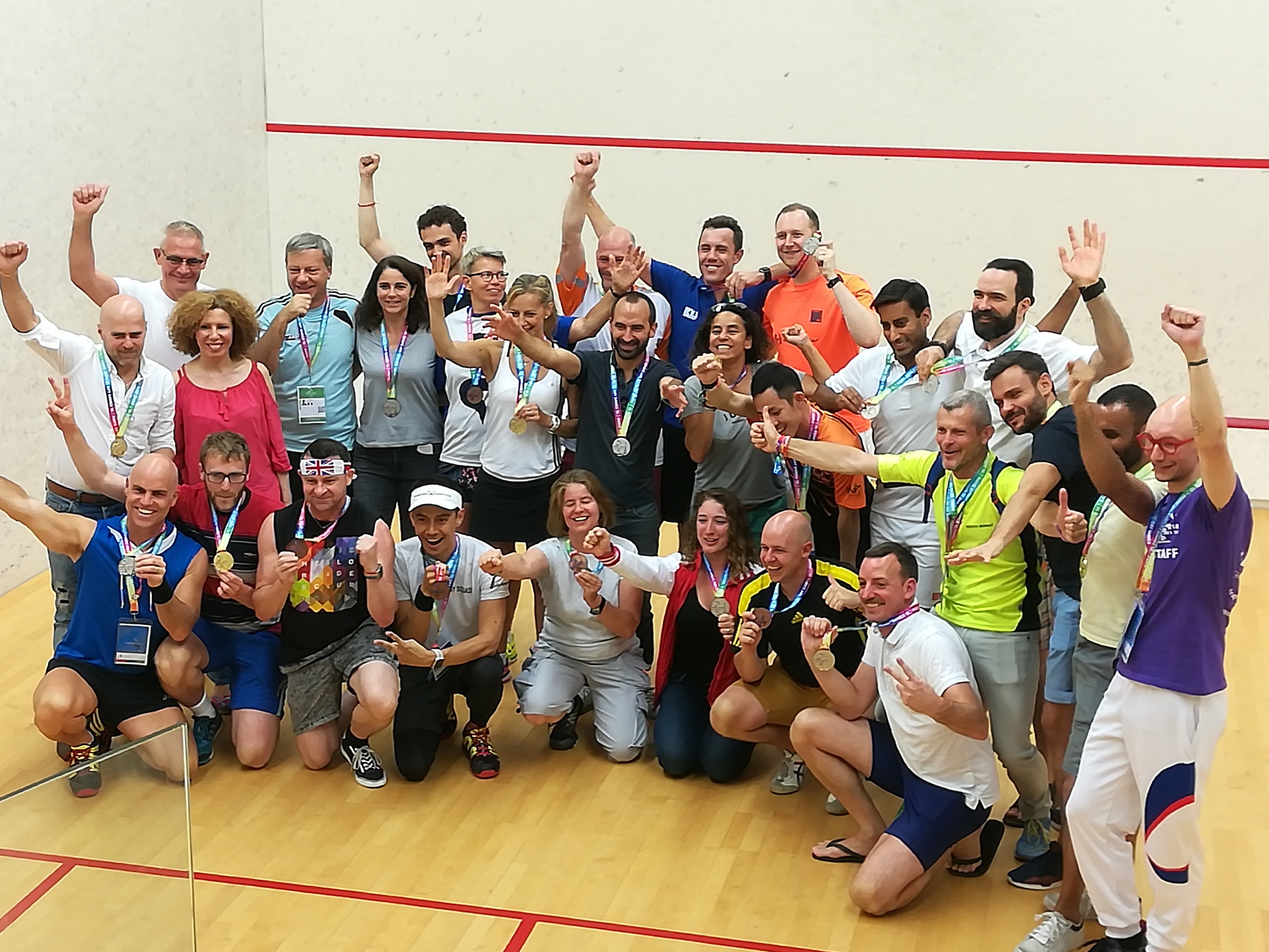 Today the biggest LGBTQ+ Squash tournament in over a decade gets underway.

The brainchild of Berlin-based coach Alexander Panasuk and OutPlay Squash London’s Fabian Valencia, the LGBTQ+ European Open 2022 Berlin will see players from around the world play in a two-day tournament they hope will act as a catalyst to help create a greater sense of community amongst the 23 LGBTQ+ squash organisations.

The European Open 2022 Berlin, while branded as LGBTQ+, is open to all, regardless of age, gender, religion or sexual orientation, something Panasuk explains is an important part of increasing accessibility.

“We updated the terminology as part of a community driven initiative over the last year [from Gay to LGBTQ+ Squash]. Because it’s not just about being gay, it’s about being inclusive and diverse which includes our straight allies.

“People ask, ‘Well, why do you need an LGBTQ+ community or tournament? Well in part it’s a social thing, about having fun while feeling safe and making new friends. People can play, train and get a beer together.”

This inclusive approach appears to be paying dividends for enthusiasm, with 110 players currently registered for the tournament, making it one of the biggest LGBTQ+-friendly squash tournaments since the 1998 Gay Games in Amsterdam, which saw 180 squash players take part.

Reflecting on the reasons for this recent success, Valencia explains that Berlin is a good location to capitalise on a growing interest in squash around Europe. “At OutPlay in London, after the pandemic [restrictions were lifted], the number of new players coming to try squash increased by about 40 percent. I think, for squash players to travel and everything that comes with that, they have to feel it’s the right place and tournament.”

Panasuk concurs, adding the increased focus on community and inclusivity in squash has likely aided in this new found enthusiasm.

“Things have come a long way,” he says. “I’m almost 50 and I remember the times when, if people found out that you were gay, you were basically shunned. You wouldn’t be included in a club, team or event.”

“Now, we have commercial support! We’ve been really well received by [digital organisation & competition management platform] Rankedin, which provides a software solution to plan and run the event, as well as other companies with equipment, merchandise and services, including: [Squash sports brand] EyeRackets, a huge sponsor of this event, is really helping us with their products and discounts; [Squash camp service provider] World Enjoyer for supporting us with participation gift cards; [Berlin squash venue] Airport Squash & Fitness Club for letting us rent the entire club and eight courts for a two-day private event; and [Berlin Squash Federation] SVBB for helping us run the event.”

Panasuk and Valencia also give credit to U.S. No.2 and three time national champion Todd Harrity for his role in encouraging the sport to be safer and more welcoming. In 2018, Harrity became the first male professional player to publicly come out as gay, something Panasuk reflects on as being a watershed moment.

“I cried when Todd Harrity sent out his tweet and publicly came out. I remember thinking ‘Wow, how the world and my sport have changed over the years.’ It’s just amazing we now have the American champion and a male pro publicly out and accepted.”

While Panasuk and Valencia say things have greatly improved in recent years, they recognise there is still some way to go, as Panasuk explains: “There is a lot of progress out there. But I would say we’re still far from being equally treated.”

“There’s still a lot of discrimination. For example, one of the clubs we reached out to [to host the tournament] didn’t want to have anything to do with us, so there’s still a lot that could be done with regards to education, awareness and support. I think this is the start of that. It’s important to remember we are just human beings, and we just want to have fun and enjoy the sport, like everybody else.”

With the strong levels of support for the tournament, the organisers hope this could signal a golden opportunity to build a more cohesive network of LGBTQ+ squash players and allies.

Valencia says: “The idea is to do more to bring all the squash players and organisations from the LGBTQ+ community together. In the past, things have been quite fragmented.”

“I sit on another committee called Out For Sport, London, which is an umbrella of over 45 different LGBTQ+ sports. Sports such as rugby [the Bingham Cup] and swimming [the IGLA Championships] have these types of tournaments dedicated to their sport and bringing in people from all over the globe. And I thought we could do that with squash as well, particularly because I’ve seen individual cities struggle. For example, about 10 years ago my favourite tournament was in Barcelona, but that doesn’t exist anymore because the squash club closed.”

Early indications are that the work of Panasuk, Valencia and fellow organisers are paying off.

To organise the tournament, Panasuk reached out to 23 established LGBTQ+ squash groups around the world, and the response has been positive. 17 of these groups are now working more closely together, with hope that the potential for a global alliance – akin to the Gay & Lesbian Tennis Alliance [GLTA], which boasts over 10,000 members – is, for the first time, a possibility.

The PSA Foundation strives for equal accessibility to squash at all tiers of the game. When we see a community within squash thriving, being social, welcoming and supportive, we’re behind them all the way. The PSA Foundation is delighted to see this level of engagement within LGBTQ+ friendly clubs and organisations and will continue to support the development of this network.